Her earliest memories are being told to stay in kitten form, a dark place, then a warm elven face smiling at her. She was adopted off the street and grew up in a well-to-do home: elvish mother, human father, and after a couple years, their lovely half-elf daughter. Dapple (named for the grey-on-white pattern of her fur) adored the daughter! There was an age difference of about four years, so she ended up treating her much like a little sister, even if to the couple she was just a fondly viewed housecat. They grew up together: playing, exploring, learning. When the half-elf lass woke in the night, the little munchkin cat would shift in the darkness to hum her mother’s lullabies to soothe the tyke back to sleep. She’d dress the kitten up and take her on outings, and the beloved housecat would sit patiently by as the girl did her homework and learned from her governess, all the while secretly learning too. It was lovely, until the mother fell ill. There were doctors of course, but the father became convinced only the occult could save her. He fell further and further into the darkest webs of society. Eventually the weight apparent in him was more of a stress to the mother than her own sickness was. Though she could no longer walk, she was gradually feeling better, but he couldn’t see it. She’d once been a dancer, and he couldn’t see her as anything but. He was fanatically determined to see her restored, even if it required sacrificing his own daughter.
Dapple saw the plans—the chants and diagrams. She had nothing against magic, but this was dark and dreadful stuff. The daughter would die so that her mother might dance once more. But Dapple couldn’t sit by and watch him kill her sister, her lovely Flower. So the night before the new moon, the munchkin cat crept into his study and smothered him where he slept slumped over his plans. His body hit the floor, which brought Her running. When she screamed…Dapple ran.
She had killed him to save Her, but She didn’t know that, and at sixteen, having hidden her other form for so long, Dapple was too startled and scared to explain. She ran and hasn’t looked back.
When Aki’s agents found her and took her in, she took the name Nairewen, meaning lament, and after much discussion, he sent her to learn the ways of the bard from House Phiarlan. 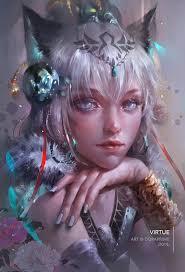